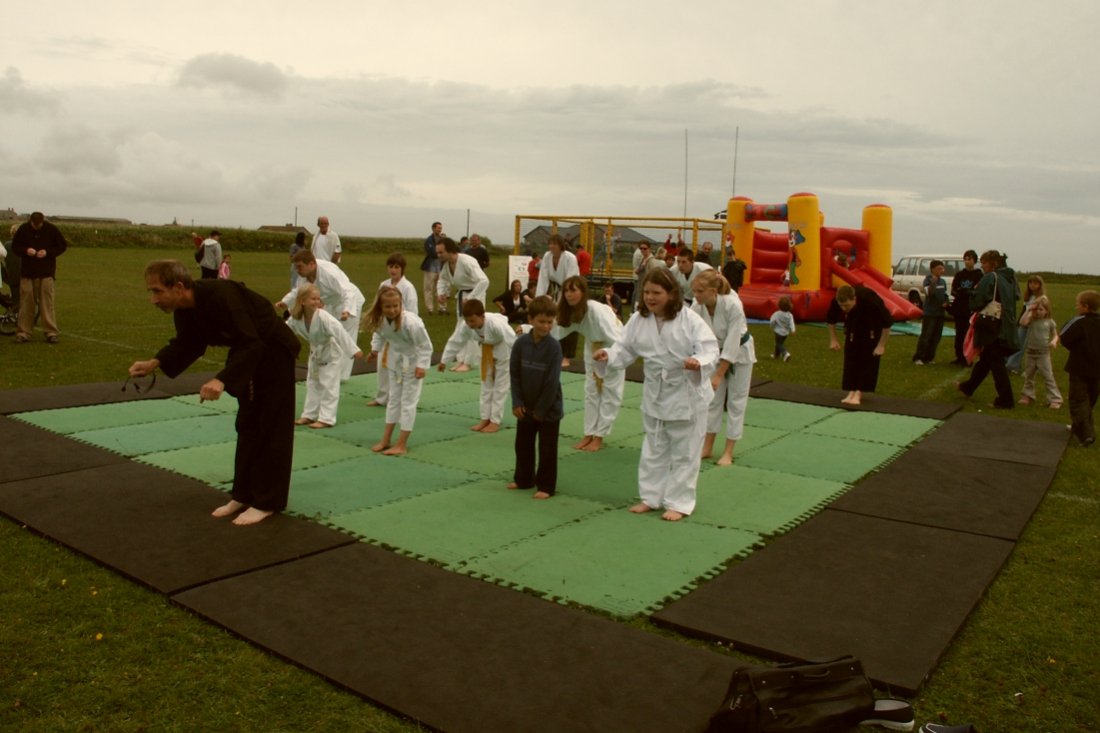 It was misty, wet and windy. Would the show go on? Go on it did, with the jigsaw mats outside on the wet grass. There seemed to be hundreds of people watching – were we ready for this? The “team”, mainly from the Sennen Club, were: Clive, Clinton, Lauren, Luke, Dave, Andrew, Ted, Azura, Poppy, Dan, Rosie, Hannah, Ben and Annie. We started our demonstration with a couple of minutes of warm-up exercise sets – not enough really but we had a show to put on.

To grab people’s attention Clive, Clinton and Lauren staged a line-up. Each person took turns to be attacked by the other two. Clive explained (or rather shouted) that this demonstration would show how we train as well as set moves. Everybody then returned to lines and demonstrated blocking, punching and kicking techniques. To show combinations, Clive punched forwards and each student reacted with block/avoidance then counter. Next on were pairs demonstrating different methods of partnered practice. Dave and Luke worked on “3 step”, Ted and Clinton did single step with Lauren and Poppy demonstrating Mayo Shin Do’s unique system of “Reaction training”. Clinton then launched assorted kicks at the shield with great gusto. To round up the pairs, Clive and Clinton staged some free practice.

So far so good; Two lines of our juniors fell, rolled and cart-wheeled across the mats to introduce some of our ground techniques. Thanks Andrew, Azura, Poppy, Dan, Rosie, Hannah, Annie and Ben for some top quality techniques. Two pairs of juniors, Azura and Dan, Andrew and Poppy then demonstrated the rear leg block Judo throw and the neck throw. Rosie and Hannah showed releases from single and double arm grab and then double hand strangle hold. Lastly in this “Juniors only” section, Andrew, Azura and Poppy performed the Mayo Shin Do No. 1 kata and the Blocking kata. This introduced the audience to katas. There are so many great katas in Mayo Shin Do – it’s really hard to choose just a few. In the end Clive did Mayo Shin 8 and Falling, Dave did Chopping and Luke Elbow. Clinton and Lauren kept together well in the kicking kata and Clinton, Clive and Lauren performed Mayo Shin 5.

As a finale to the show, three lines of students rolled across the mats punching, kicking or barging shields held by Clive, Dave and Ted. A brief “Thank you very much” and a final bow and we had survived with no major slip-ups.

Thank you everyone for the time that you gave up to practice and much praise for the high standard and excellent performance of our 2001 Demo Team.