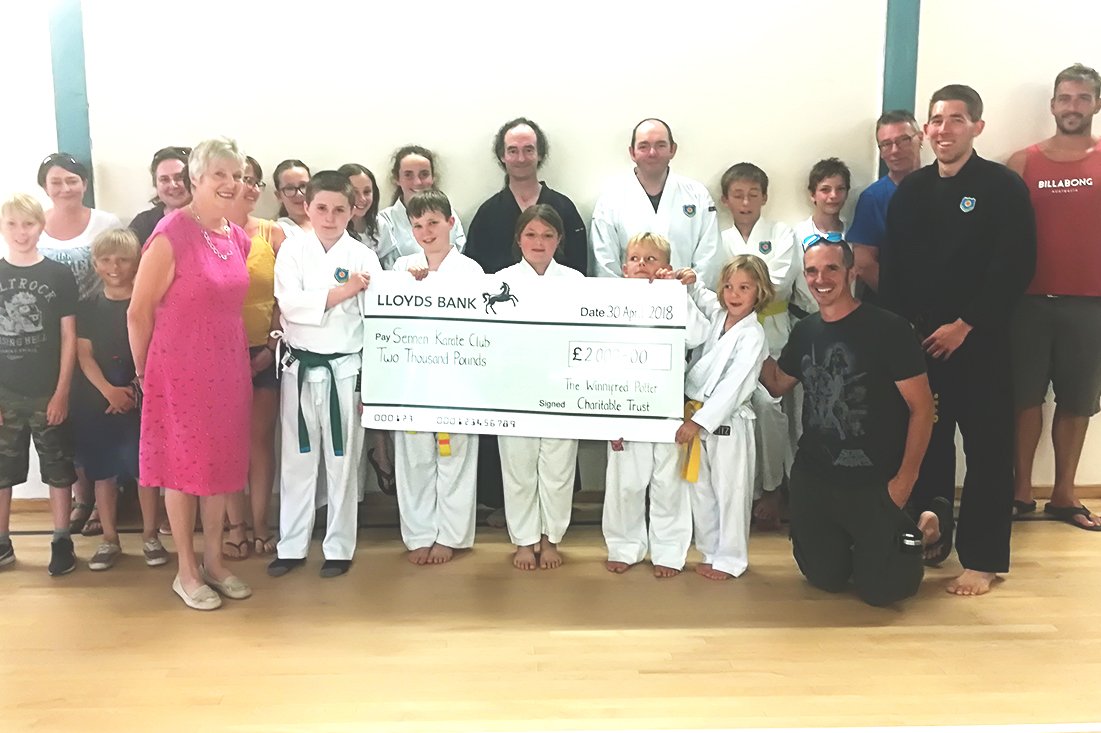 After our Summer Karate Grading we welcomed a very special guest, Gail Hunt the founder of The Winifred Potter Charitable Trust, a trust which was set up by Gail in memory of her mum. Gail was invited along by Sennen Karate Club Instructor Luke Jackson to present the club with a large cheque which was awarded to the club after a successful application.

Luke has been trying to raise funds for the club over the past 3 or 4 months to allow the club to purchase some new specialist Martial Arts mats as some of the current ones are almost 30+ years old and no longer fit for purpose. These mats will cost somewhere in the region of £6000 and will allow students to train to their full potential in a safe environment.

Luke has been working hard, applying for grants and organising various fundraising events to help the club reach its target. Luke was lucky enough to meet Gail a few months ago in his local shop where he works in Sennen. After a short conversation Gail invited him to fill in an application form, which he did. A few week later to his sheer disbelief a cheque came through the post for the sum of £2000. The amount donated by Gail and The Winifred Potter Charitable Trust was simply amazing and has gone a long way to securing the funds needed to purchase our new mats.

Luke would like to thank Gail for her immense kindness and generosity which will not only benefit the Sennen Karate Club but also the village of Sennen and surrounding areas by allowing us to increase the number of students we can offer karate lessons to due to the safe matting area we will soon have.

Luke has several fundraising events planned, including a tea and coffee morning at the local Sennen Farmers Market, who have also kindly donated £500 to the club towards our mat fund. The club will soon be selling raffle tickets in a bid to reach or target. Stay tuned for more information on this.