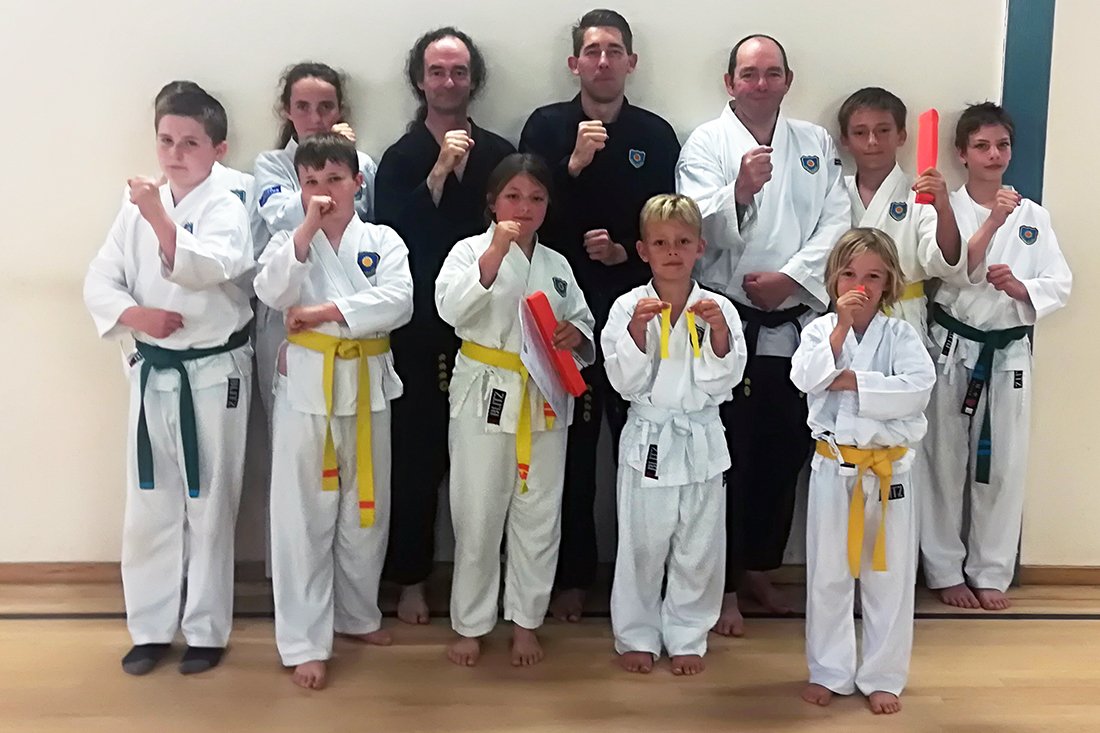 The grading got underway at 9am, with students performing a set number of techniques in lines and then trying them out paired up with one acting as the attacker and the other one defending, then the roles were reversed the attacker became the defender and the defender became the attacker. After an hour of practising the various techniques students then split into 3 groups and got to show the instructors how they coped when hitting a strike pad. This allowed the instructor to see whether students were focusing more on power rather than technique and whether the strikes had good focus and impact. They then returned to lines where the focus was on the technique of the kicks.

Next was kata, this year we did it a little different, with all students performing the 3 basic katas called in turn by the higher graded students. Once each basic kata had been done 3 times each Yellow Belt student then had to perform a kata of their choice in front of the rest of the class, a daunting task which has seen some Black Belts crumble in the past. Each one did a fantastic job and completed this task with flying colours.

After the kata we did some paired up work including one and three step sparring, hands only sparring and focus reaction training.

The Instructors then went into the kitchen to discuss the results whilst Ruby our Junior Instructor and Brown Belt lead the grading and had the group do some basic stepping with 1-6, 7 dials and u-stance.

After about 15 minutes the Instructors returned to give the group some feedback and gave some students a warning about some basics not being good enough and they had 10 minutes to show they could perform it correctly.

The grading then finished and it was time for some refreshments. During the refreshment break students were called into the kitchen one at a time to receive feedback on how they had done, and were presented with their award. Unfortunately this took MUCH longer than i had expected and lead to us over running by quite some time and meant things were a bit hectic towards the end.

To those students who were attending their first grading you impressed us with your focus, level of discipline and the standard of your techniques. You as well as everyone else should be proud of your performance today.

The following grades were awarded:

All students received good feedback and will hopefully take on board what was said to them, everyone has something to work on and improve, even us Black Belts are always improving. A big thanks to Denzil and Paul for their assistance and to Ruby for taking the last 15 minutes of the grading.