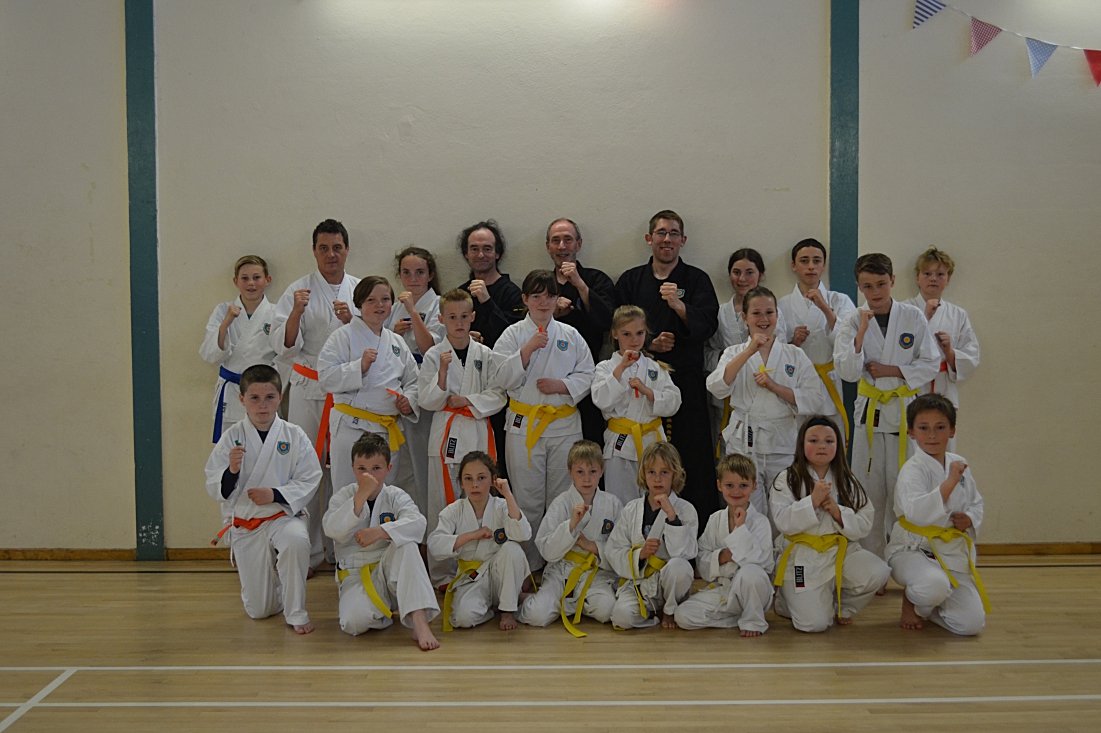 The grading was well attended with enthusiastic students who were keen to show off their skills. The grading started with a 20 minute warm up ensuring everyone was ready for the 2 hour physical karate examination.

Once the warm up had ended students were then given various techniques to do in lines, with the black belts keeping a keen eye on the standard of the technique and the students overall effort and spirit. These techniques included various punches, kicks, chops, blocks, and combinations depending on the students grade.

Students then had to show their ability to escape from various grabs and holds using a set of releases they had learnt from their syllabus. This included escaping from a single arm grab, a double arm grab and a potential strangle hold.

As time was quickly ticking away next up for the students was katas, all students had to perform the three basic katas, again under the watchful eye of the black belts. As the katas increased in difficulty students who did not know them were then put in a line up with Clive and they practised dealing with a punch to nose, each taking it in turn to be the one being attacked. Once the higher grades had finished their katas they then went on to do some paired up sparring. Starting of with some one and three step sparring and finishing up with some free practise sparring.

In the mean time the white belts finished up with a game of ninja, which is like an introduction to sparring but all attacks are aimed at the belt.

After 2 hours of training the grading came to an end, and it was time for the black belts to discuss the results and the students to go and get some well deserved food.

The grading panel felt the grading had been a big success and the students had on the whole performed very well and to a good standard. It is always a tough decision to award or not award a student a grade and there are a lot of factors to take into consideration when deciding what to award a student.

The results are as follows (in grade order)

Phillippa Gopsill: Phillippa was attending her first grading today, has been training consistently for the past 4 months, had a good grading and was awarded 2 yellow tags for her efforts.

George Rimmer: George who missed the last grading came into the grading with 1 yellow tag, started off the morning slowly but improved as the grading progressed. George has many hours under his belt and was awarded a further 2 yellow tags.

Mawgan Elford: Mawgan has been training for some time now and is an ever present student at Sennen. Mawgan who had 3 yellow tags prior to the grading looked calm and composed today and displayed a good standard through out. Mawgan was awarded his yellow belt.

Tegen Elford: Tegen like her brother Mawgan is an ever present student at Sennen, previously had 3 yellow tags on her white belt, preformed well today and to a good overall standard. Tegen was awarded her yellow belt today.

Jack Chappell: Jack when he put his mind to something is very good and today his concentration levels were good. Jack who had 3 yellow tags on his white belt had a good grading and combined with good number of hours training was awarded his yellow belt.

Lydia Chappell: Lydia similar to Jack is really good when she puts her mind to it. Today Lydia put in lots of effort and to a good standard. Lydia has been a member at Sennen for a while now came into the grading with 3 yellow tags and left wearing a yellow belt.

Jago Pierre: Jago another student who came into todays grading with 3 yellow tags. Jago gave a solid performance today and was awarded a yellow belt and 1 orange tag.

Carles Preston: Carles has been a consistent student at Sennen for a while now, having come into the grading with 3 yellow tags performed to a good standard today and again was awarded his yellow belt.

Dakota Mason: Dakota is alway a steady performer in class and today. Dakota showed a good understanding and has many hours under her belt. Dakota came into the grading a white belt with 3 yellow tags, and left with her yellow belt and 1 orange tag.

Jasmine Rimmer: Jasmine trains at Sennen regularly and makes everything look easy. Having put in another solid performance today Jasmine was awarded two orange tags to add to her yellow belt.

Maeya Mason: Maeya who got her yellow belt last time out had a good grading and was awarded an orange tag.

Ethan Reynolds: Ethan who struggled last time out produced a much better performance today, having previously gained his yellow belt Ethan was awarded an orange tag for his efforts.

Ben Mason: Ben who is a very passionate student who always gives 110% effort and has a good knowledge of our style gave a solid performance today and was awarded an orange tag.

Francisco Strous: Francisco narrowly missed out on his orange belt today, having performed well on the day Francisco was awarded his third orange tag. A few more hours and an orange belt might of been on the cards.

Angela Strous: Angela like Francisco just missed out on getting her orange belt today, but did well and was awarded her third orange tag. A few more hours and an orange belt might of been awarded.

Jimmy Green: Jimmy who trains regularly at Sennen was one of the standout students today, demonstrating the techniques to a good standard and having applied himself well to the tasks given. Jimmy was awarded his orange belt.

Neil Symonds: Neil who trains along side his two sons at Sennen has been solid for some time now has been keeping himself back from progressing to keep him at the same grade as his youngest to encourage his progress. Today it was felt that Neil had to grade due to being much better than his current grade suggested. Neil was awarded his orange belt.

Jasper Symonds: Jasper who is still relatively young has been a loyal student at Sennen for some time now and has improved over time. Jasper was so close to getting his orange belt but it was felt that he just needs a bit more concentration when training to fully grasp the techniques to enable him to do them to an orange belt standard. Something that we will be working on with Jasper over the coming months.

Joseph Symonds: Joseph is another student who has been very loyal to the Sennen club and is starting to progress well, after a fine showing today Joseph was awarded his third green tag. If Joseph carries on his improvements a green belt wont be too far away.

Tommy Barnicoat: Tommy like Joseph is now starting to show his qualities, if Tommy continues to progress like in the past 6 months he will soon be wearing his green belt. Tommy was today awarded his third green tag.

Rosco Reid: Rosco gave one of his best performances today, looking sharp and focused throughout. Rosco impressed the grading panel with his efforts and was awarded his blue belt.

Ruby Wilson: Ruby is possibly our most keen student, attending every possible class and always showing a willingness to help others. Ruby is a role model to the younger students and someone they can look up to. Ruby has a good number of hours under her belt and was awarded her first brown tag.

A big well done to everyone today, and a thank you to all the parents and students for your continued support of the Sennen and Marazion karate clubs. Also thank you to Emma Wilson who helped out with the food and making sure there was enough to go round.