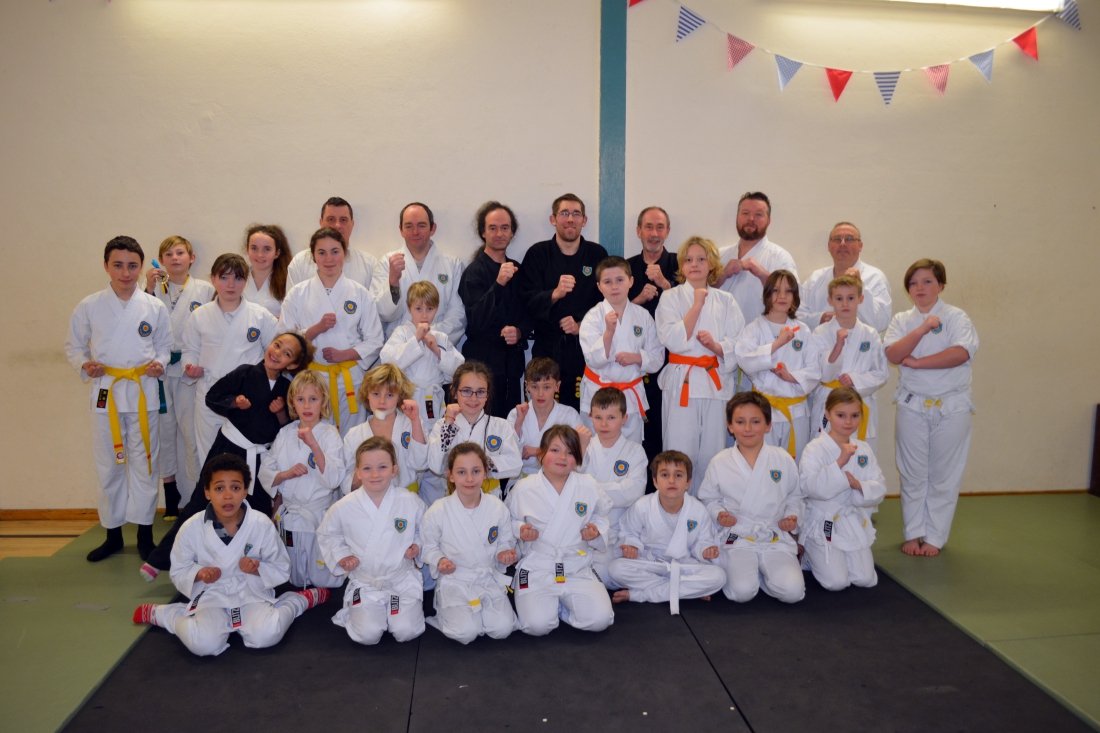 Karatekas from Sennen and Marazion MayoShinDo karate clubs participated in our annual Spring grading which was held at the Community Centre, Sennen. The event was well attended with almost 30 keen karatekas braving the cold early morning start.

Students spent the first hour of the grading demonstrating some of the basic techniques for their grade, this included blocking, punching, stances, stepping, kicking and combinations. All students performed these techniques to a good standard.

The second hour things got a bit more advanced, the higher graded students were paired with Clive who got them doing some paired up sparring, starting off with one attacker and one defender hand only attacks, and ending up with both attacking and defending hand and feet attacks.

Whilst the high grades were sparring the yellow belts were paired with Denzil to perform some focus reaction techniques and some one step sparring which is the first level of sparring. White belts were showing off their break falls and rolls to Paul and Luke.

Next up was the katas which were called by Paul and watched by Clive, students who didn’t know any katas did some paired up work with Denzil and Luke. Once all the katas had been performed Luke asked one student who had just learnt a new kata the night before if she wanted to perform it in front of the fellow students and the parents who were watching, Ruby who is a blue belt was happy to oblige. The kata Ruby was to demonstrate was the falling kata and is a brown belt kata. Ruby was joined by Clive, Denzil and Paul for the kata. Ruby not only remembered the kata but did it to a very good standard for someone who had only gone through it fully two or three times before.

The grading finished up with more paired up work this time it was releases, students showed how to escape from a potential strangle, or a single and double wrist grab.

After 2 hours the grading finished and students had a bite to eat and drink whilst the grading panel sat and discusses how the students performed. After much deliberation the results are as follows:

Roscoe Reid: Rosco who was a Green Belt 1 Blue Tag, was awarded another blue tag. Roscoe who trains at Marazion had a good number of hours training, started of a bit shaky but improved as the grading went on.

Finn Edwards: Finn was a yellow belt with one tag coming into the grading, was awarded another two yellow tags making him one step away from his orange belt. Finn who trains 2 hours every week had the most number of training hours out of all the students performed well on the day and was consistent throughout.

Jimmy Green: Jimmy another student who trains for 2 hours most weeks had a lot of hours training under his belt. Jimmy was a yellow belt coming in the grading and was awarded 2 orange tags for his efforts. JimmyÃ¢??s performance was good today demonstrating the techniques to a good solid standard.

Freya Cook: Freya who was a yellow belt with 1 orange tag didn’t quite have the required hours to grade but performed well on the day and was awarded another orange tag.

Angela and Francisco Strous: Angela and Francisco are another two who have missed a bit of training due to being away on holiday over the Christmas period, They both came into the grading as a yellow belt and 1 orange tag, having performed well and showing a good understanding of what is expected of them they were both awarded another orange tag.

Ben Mason: Ben who came into the grading as a Yellow belt. Ben gave a solid showing today performing his techniques to a good standard with maximum effort. Ben trains often and had the required hours to grade. It was noted that Ben needs to try and relax a bit more whilst training to help take his techniques to the next level. All in all the grading panel were impressed with his efforts today and awarded him an orange tag.

Maeya Mason: Maeya is another student who consistently performs well and often trains for 2 hours a week. Coming into the grading Maeya was a White Belt with 2 Yellow Tags. Maeya impressed today and was awarded her Yellow Belt.

Jasmine Rimmer: Jasmine is a natural and takes everything in her stride often finding the techniques easy. Jasmine who missed the last grading trains for 2 hours every week and impressed the grading panel with her performance today. Jasmine came in to the grading as a White Belt with 1 Yellow tag and left as a Yellow Belt.

Michael Flynn: Michael who trains at Marazion has been training regularly for some time now, came into the grading as a White Belt with 1 yellow tag. Michael performed well today and was awarded his Yellow Belt for his efforts.

Jack and Lydia Chappel: Jack and Lydia both have a good number of hours training coming into the grading. Both students were a White Belt 2 Yellow Tags prior to today, both students performed to a good standard on the day and were awarded another Yellow tag each, one step away from their yellow belt.

Dakota Mason: Dakota gave a solid performance today, performing the techniques to a good standard. Dakota came into the grading with good hours for her grade and a white belt 1 yellow tag. Dakota was awarded a further 2 Yellow tags leaving her one step away from her yellow belt.

Jago Pierre: Jago who was a white belt with one tag had the required number of hours training to get a new tag today. Having performed well and impressing the grading panel it was decided Jago would be awarded two yellow tags again leaving him one step away from his yellow belt.

Carles Preston: Carles was another student who put on a good show today with his standard of techniques impressing the panel. Carles came into the grading as a white belt 1 yellow tag and left as a white belt 3 yellow tags.

Skye Tasks: Skye has been training for several months now and occasionally does 2 hours training a week. Skye performed well today and was awarded a yellow tag to put on her white belt.

Ruby Wilson: Ruby a blue belt has always performed above her level and has progressed through the grades at a rate of knots, having jumped a belt at the last grading Ruby performed well again today but didn’t quite have the required hours to gain any new grade this time.

Jasper Symonds: Jasper is a student who always tries his best, just missed out on his orange belt today. Despite a decent performance today Jasper was a little short on hours needed.

Joseph Symonds: Again like his brother, Joseph always tries his best and performs to a good standard, however on this occasion didn’t have the required hours training to progress to the next grade.

Tommy Barnicoat: Tommy like Joseph has been solid performer and is improving all the time, again just lacks the required hours to progress the next grade.

Ethan Reynolds: Ethan who struggled with the cold today had previously jumped a couple of grades at the last grading and was short of the required number of hours to progress to the next level today.

Neil Symonds: Gave a solid performance today and showed a good understanding of what he was asked to do. Neil who is just one step away from his orange belt didn’t have the required number of hours to progress further.

Henry Dowling: Henry is a relatively new student who shows a keenness to learn and his attitude in class is always an example to others. His techniques are good and with more training Henry will quickly move up through the grades. Unfortunately Henry didn’t have the required hours to progress to the next level today.

Jemima and Jacob Darling: Having only been training for 6 or 7 weeks both students performed really well today, keeping going even when they were not sure of some of the tasks being performed. Unfortunately both students didn’t have the required hours to progress this time.

A big well done to everyone who took part today, everyone performed well and deserves a big pat on the back. As students obtain a higher grade the number of hours need to progress to the next belt increases. This means students will often find they grade less often. Exceptions can be made to this rule if a student performs consistently to a level above their grade. Below is a guideline to the number of required hours to achieve each belt.

Keep up the good work!! Special thanks to Emma Wilson for overseeing the buffet and to Lynda Barnicoat for taking the photos.