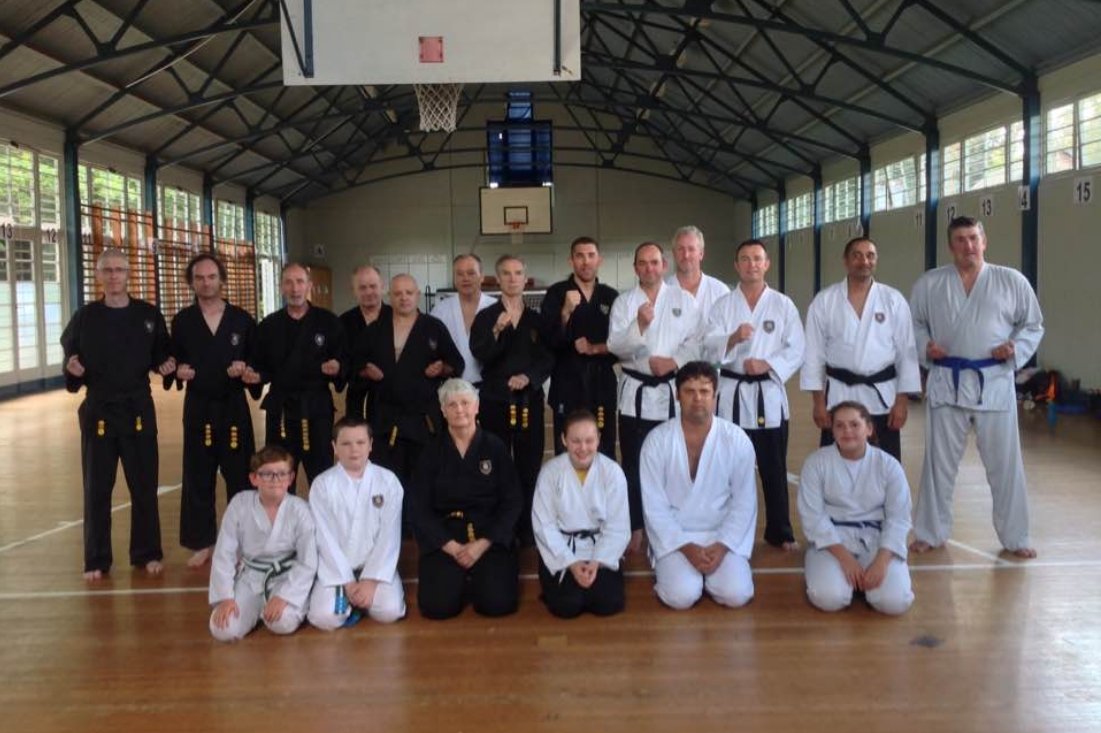 The 2017 annual MayoShinDo Black Belt karate grading was this year held at Radley College Sports Centre, Oxford on the 1st and 2nd of September. Karatekas of various ages and grades from Oxford and Cornwall MayoShinDo karate Clubs were in attendance, keen to grasp the opportunity to demonstrate their techniques in front of a 7 person grading panel whom were all 4th dan black belts or higher.

On the first day of the grading karatekas endured 6 hours of physical training mainly consisting of basic techniques including the various types of punches, blocks, kicks and stepping. Due to these being ‘basic’ techniques the higher graded karatekas were expected to perform these to a near perfect standard with the emphasis on ensuring the technique being performed correctly and to the correct target, as well as having a good understanding the mechanics of how the techniques worked. With the mixture of different grades it was interesting to see how each student performed in relation to their current grade and their fellow students.

Once the basics were completed all karatekas were asked to perform the various katas up to green belt each taking it in turn to lead and call the katas. Once the katas had finished the karatekas were given a well deserved 30 minute break to grab a bite to eat and drink. The black belts also had to complete a written exam.

The grading resumed after the break with karatekas being asked to pair up and demonstrate various releases and judo throws for their grade. This was the final action on the first day.

The next morning karatekas were told to line up and were given specific blocks to perform, unlike yesterday today they had 3 of the grading panel coming around and ‘attacking’ them with specific attacks which allowed them perform the block asked of them. Following this karatekas were given several combinations to do to an imaginary attacker seeing how they got on with visualising where the attacker is and how they would react to the previous attack ensuring each attack is targeted correctly in relation how the attacker would respond.

Next it was on to some pad work with 3 of the grading panel each holding a set of pads with the rest of the karatekas taking it in turns to strike each of the set of pads using set techniques given to them.

Then it was on to the higher grade katas to finish off, it is fair to say this was the most disappointing aspect of the grading with many basic errors creeping in and often katas having to be restarted due to forgetfulness. This is something which frustrated the karatekas and examiners alike due to the unusual inability to perform these to the required level, which is something usually performed much better during regular training sessions.

After an intense grading and much discussion the following grades were awarded:

A big well done to everyone to passed their grading this weekend, with one final word from Derek who emphasised how important it was for all students but especially the higher grades to ensure the techniques are understood correctly and practiced to ensure they are improved. For me it was a really good weekend and a great chance to see our extended MayoShinDo family whom most i’d not previously had the pleasure of meeting. Hope to see you all again soon, keep up the training be confident in your own ability and encourage each other to be the best you can be. Until next time. Luke!!