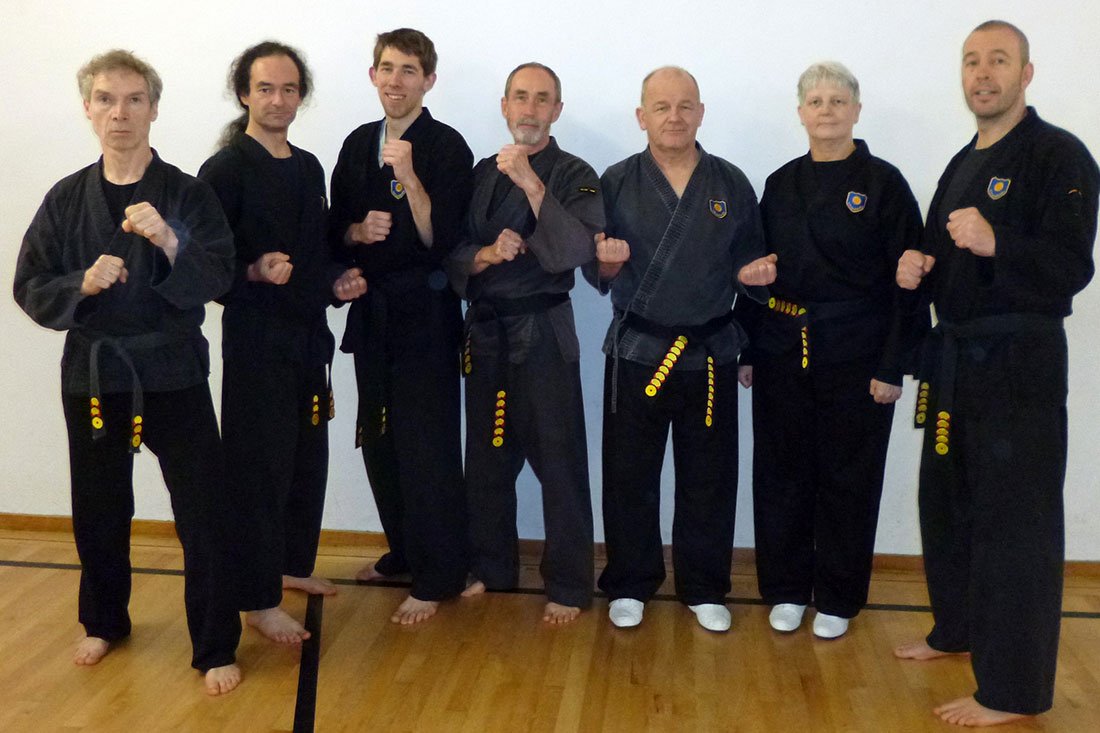 As we bowed to start the first session at around nine thirty, it was great to see all the brown belts up and their instructors. Derek headed up the ‘grading panel’ of Elaine, Clive and John. He explained that this year he wanted everyone to work hard but not to the point of exhaustion as the emphasis was on good MayoShinDo technique. Poor low grade techniques would fail but the higher grade moves would be given some allowance.

And so we began. After the exercises a long time was spent on Footwork and Stances. Gradings can be nerve wracking events and its easy to be ‘put off’, I know. Even so, it was felt that there was too much poor posture and movement. After looking at blocking and other hand techniques, everyone was glad of the break.

Lesley had food and drinks ready in the kitchen but no relaxing for those grading who had to eat while they tackled the theory test. The afternoon session started with kicking then moved on to combinations, not cold now! The hall was only booked until 3 so it was time for lines.

Derek was disappointed that people didn’t seem to be grasping some basic concepts – the standard would have to be much higher tomorrow. Saturday evening was spent at Clive and Lesley’s, eating, drinking, going through the theory paper, talking karate and putting the world to rights.

Sunday at 9, and it all started again. A brief warm up was followed by a longer meditation. We went straight into an hour of kata with the people grading doing the calling. Whole body movement, intent, flow, focus. MayoShinDo 4 reversed kept us all entertained! We moved onto the mats and it was time for releases, sweeps, scissors and ground defence. The session ended, once again emphasising basics, with focus – reaction and punch – block drills. The panel retired to the kitchen for the difficult task of assessing and deciding. In the final lines of the weekend, Derek said that the standard today was greatly improved and that there was a good spirit of co-operation.

However, there was much work to be done on the basics and it was down to the instructors to work with their students. There will be a training seminar / grading at Radley, 8th June 2013, nine til one pm. This is open to all as a seminar but the idea is to give those who did not pass this time the chance to practise and go again. Derek had one last thing to say. He was very pleased to announce that John Aylwin has been awarded his 6th Dan Black Belt – well done mate. And well done to those passing and commiserations to those who didn’t – either way onward and upwards and lets all get together again soon. Thanks to Lesley for the feeding and thanks to the panel and Ian, Luke and Denzil for their input.