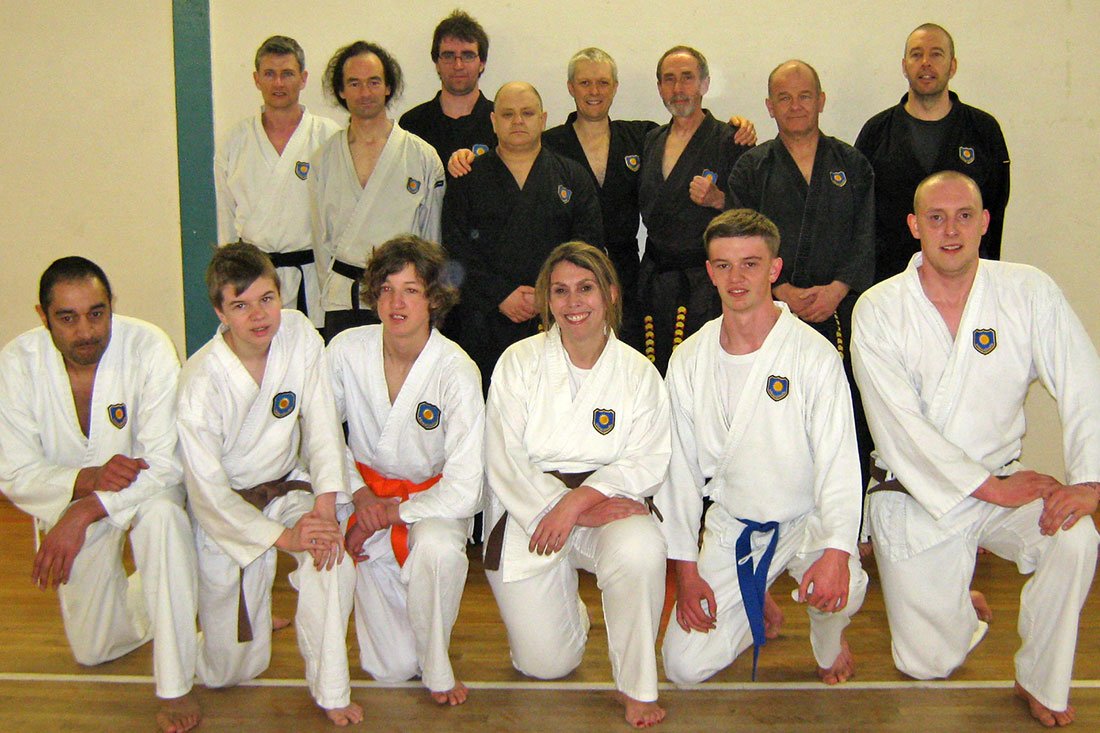 Candidates for Black Belt and Dan grades joined the top grades in MayoShinDo and other enthusiasts of all standards in this year’s grading. Karatekas from all clubs and areas can get together, train, eat, drink and generally have a great time. So here were all were: Derek, Elaine, Clive, Paulo, John A, Clint, Luke, Andrew, Denzil, Darren, Dave, Mike, Shaun, John G, Louise, Richard, Jonathon, Paul, Liam and Delano.

Those hardy enough joined Clive for Friday training then refreshment at the First and Last. Not too long after 9 next morning the Grading Panel, Elaine, Clive, Paulo and John joined Head Coach, Derek Collins and the class.

The grading started, as usual, with a bow. The class was told to give themselves a 10 minute warm-up. This year each student grading was given a ‘mentor’ to observe and comment on technique – no not to spy! This was to help and involve the mentor by seeing if they could identify the good, the bad and look at their own movement.

This year Derek moved around the syllabus as opposed to gradually through it. As ever it was the lower grade techniques that had to be the best. Nearly noon, people were fading. Time for food and drink break, courtesy of Lesley. And of course the theory test – questions on our style, first aid, anatomy and nutrition.

After lunch more combinations, line-ups, falls and rolls and some tricky spinning kicks. Pushed for time as ever, we bowed out at 2.30. Time for a chill out afternoon then a really pleasant evening at Clive and Lesleys involving much food, drink and chat.

With everyone deprived of an hours sleep due to the hour forward, Derek began Sunday morning with a lively exercise session that got us all pumping. Footwork, elbows, scissor kicks, take-downs, ground defence. Time pressed us on to kata, not a subject to be rushed. The lines worked their way through them with some reversed. Then each had to choose and perform a kata on their own. Not easy to keep calm!

Nearly time to finish and still no paired practice. So it wasn’t one against a group, it was everyone against each other, keep moving! Use your feet well, widen your vision, get in, attack, get out, move on, stay covered, watch your back!

The morning had flown by, time for our Chief and the panel to look at the theory knowledge, give their own comments and look at the mentors notes. Each person grading was seen and offered comments and advice. This year everybody succeeded in reaching their target. Unfortunately there was no time to make proper presentations – something we will sort out next year.